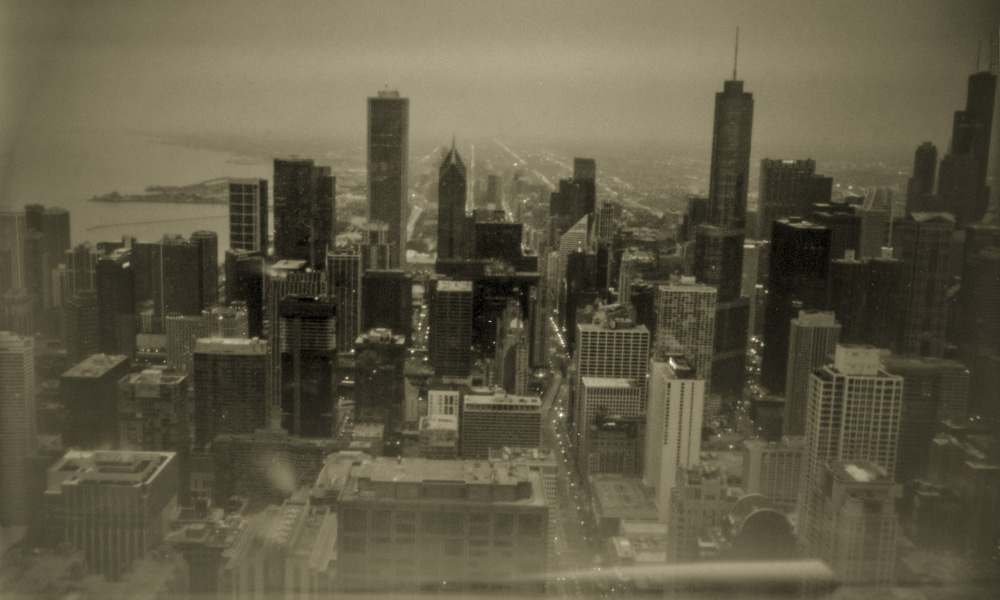 What is photography today, how has it changed, is there still any point in taking photographs?

'Camera Obscura' or 'Pinhole Camera'
The Camera Obscura (from Latin "camera": (vaulted) chamber or room, and "obscura": darkened) consists of a light-proof room or box with a small hole, which is why it is also referred to as a Pinhole Camera. Light comes through the hole and hits the surface opposite the opening. An upside-down, (mirror-) image of the scene outside the camera appears on that surface. The Greek philosopher Aristotle (*384 BC - † 322 BC) described this phenomenon more than 2300 years ago. From the end of the 13th century the Pinhole Camera was used by astronomers to observe sunspots and solar eclipses, without having to look directly at the sun.

The first lenses came into use after the middle ages, after which portable versions of the Pinhole Camera were used by artists for preliminary sketches, in order to reproduce perspective accurately. Lenses subsequently got better and better. In the 19th century it became possible to ‘capture’ and freeze the Pinhole Camera’s image and thus photography was born.

Moreover, almost any photo can be transformed into a seemingly exciting picture using digital editing. The framing of an image is not decided until it is seen on a computer screen and unwanted elements are removed. Contrast and colour are intensified and, in my view, bear little resemblance to what is seen in reality. A new reality; a new set of facts is created - ‘postfactual’ as it were. Then, when we see a place that we first saw in a photograph, we are disappointed.

Since 1995, using a Pinhole Camera has been my way of questioning the meaning of photography in this time of imagery inundation, by going back to the basics of photography and consciously imposing limits on myself. There is no lens, just a small hole, behind which there is a hand-made black box containing light sensitive paper or film.

Since then I have created three larger series of work: 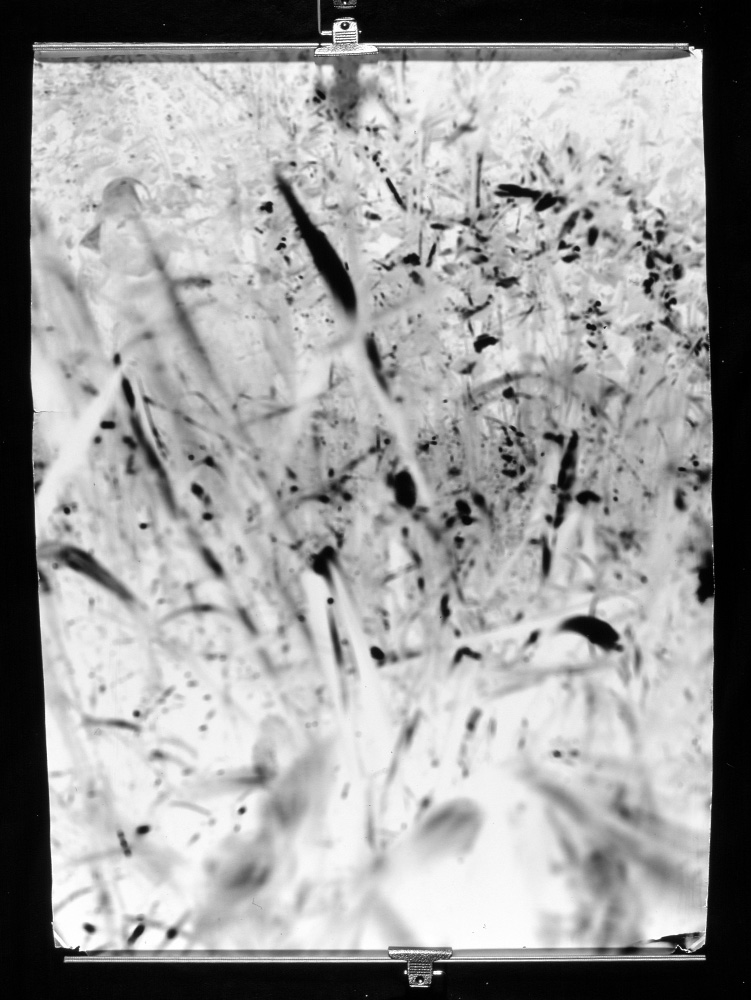 1.) I built the ‘Cubic’ in 1998. Once assembled, it looks almost like a dice with metre-long edges. The exposure takes place directly onto black and white baryta paper, with a height of 108 cm and width of approximately 80 cm. The length of exposure ranges from seven minutes to seven hours.

I develop the images using a sponge and a paintbrush, thereby interfering with the process in a painterly way, halting or accelerating the development process. This results in a high contrast negative image (see example on the left). The motifs are plant structures moving gently in the wind, which creates a play of sharpness and blurring. So far the series consists of ten photos, four of which can be seen here. 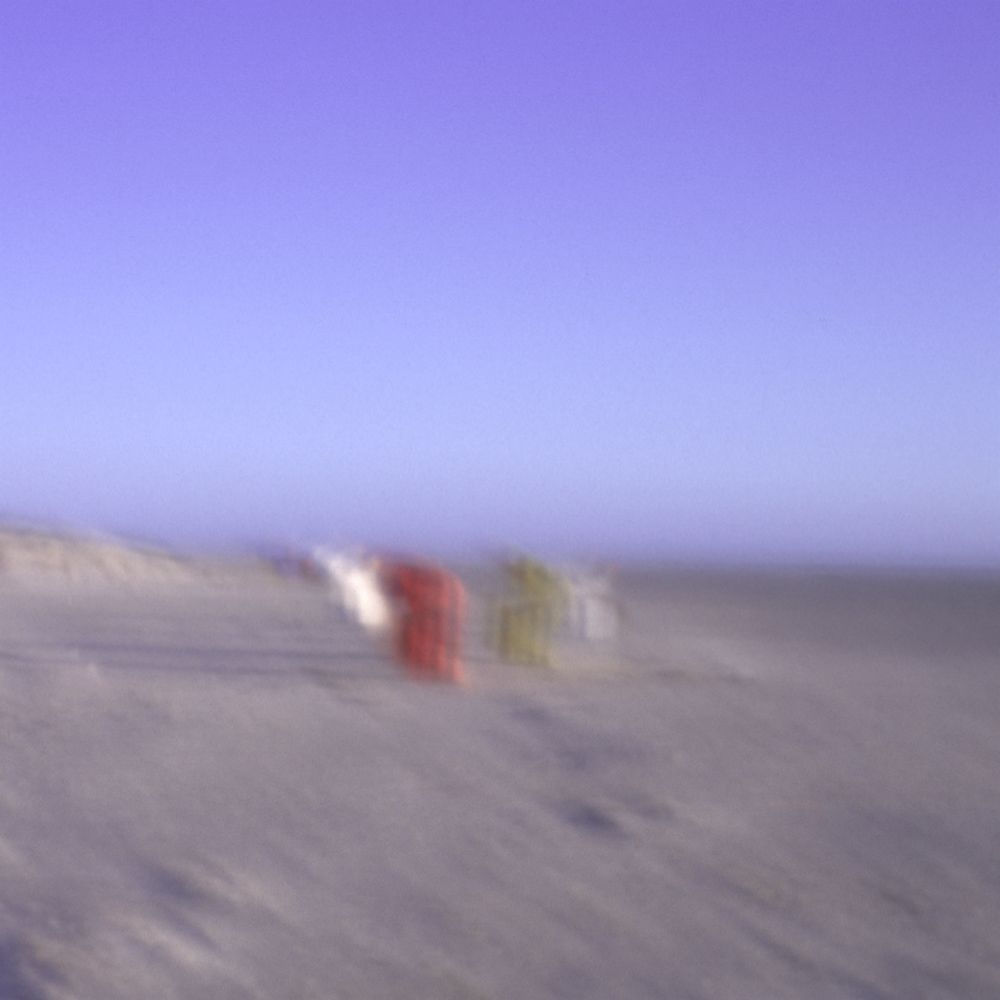 was created in 2001 and was my thesis at the Dortmund Polytechnic. The topic is the so-called residual vision of people who are very partially sighted. I took the 36 photos with my Nikon F90X, using a hole in the lens cap instead of the actual lens. I used a slide film and automatic camera settings, to have the least controlling influence possible. Subsequently I scanned in the slides and printed out the raw versions, without any editing.

The three photo series in the book were created in Düsseldorf, London and on the island of Amrum (see example on the right). The writer and artist Johanna Hansen received the photos, without knowing what I had photographed, sorted them into smaller series and wrote poems to accompany them. I then used a braille printer to print these poems onto the photos. In an ideal scenario a seeing person would describe the photos to a blind person, whilst the blind person would in turn read the poems to the seeing person. (ten photos)

Since 2004 I have been experimenting with a camera obscura converted from a digital SLR (single lens reflex camera), and am on the lookout for a new topic. I have yet to find a way in which camera obscura and digital photography connect. 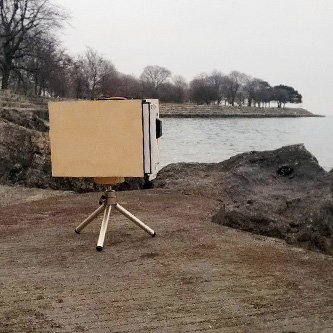 3.) 4×5 Inch Obscura (photo on the left) - in the autumn of 2016 I came across the sheet film holders for the 4x5 view camera and an immediate idea was born. Large format photography is a slow and deliberate process and that is exactly what I am going for. The pure costs of film and development make it very important to choose a worthwhile motif. Once this has been found, the postcard sized negative is placed in a changing bag inside the sheet film holder, a measurement is taken of the available light, and exposure time is calculated. The time with this camera is usually between 45 seconds and three minutes. As with the first two series, the focal length for the 4x5 Inch Obscura is fixed at 90mm (which is the equivalent of a 24mm small format lens). This means that, instead of using a zoom, I look for a fitting motif and keep changing my viewpoint until I am happy with the image. Since there is no viewfinder or LCD screen this requires practice and concentration. After initial experimentation, January 2017 saw the creation, in Chicago, of the first series of four photos (one of which can be seen at the top of this page.)